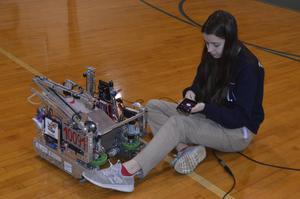 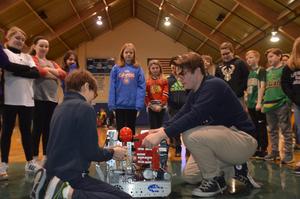 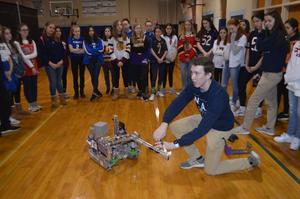 Members of the World Champion Carmel Catholic High School Robotics Team rolled into the School of St. Mary gymnasium January 25 and were greeted like rock stars. The Not Year Average Nerds (NYAN) team delivered a presentation on the factors that went into their winning the 2019 World Championship while providing an important message: That robotics and STEM can be cool.

The team brought along several robots as well as side projects and were able to break into small groups in order to demonstrate them for about 100 sixth, seventh and eighthgraders.

“I’ve been involved with NYAN since my junior year and at that time I was considering the idea of pursuing a STEM major in college,” said Carmel senior Terri Brinkman. “It gave me a really good foundation and has taught me so many applicable skills such as creativity, critical thinking, and problem-solving. I know that I can carry those skills with me in my future careers and in college.”

NYAN discussed the research it does as a robotics team in the hopes of getting the middle schoolers interested in a future career in STEM—short for Science, Technology, Engineering and Math.

“Students have to see that STEM doesn’t just start when they’re adults,” said School of St. Mary Science Teacher Megan Wittekind. “They have to experience learning situations which involve both failure and success and the students from Carmel did a wonderful job in showing my students how they are able to fail in some situations and still move on.”

“We probably put in about 150 hours a week between all of us,” added Carmel senior Ben Geoffroy, who went on to explain that there are many roles and jobs within N.Y.A.N., from coding, to marketing, to actually building the robots themselves.

Geoffroy added that not everybody on the team knows how to do everything. For example, he highlighted freshman Mary Titterton, who handles coding. “It’s really complicated,” he said.

Fellow team member Brinkman added that there is something for everybody to do on the robotics team. “Basically, whatever interest you have, from marketing to coding to actually building the physical robot, there’s a place for you on the robotics team,” she said. “We have different sub-teams; marketing, programming, build and CAD (computer-aided design), and we all contribute to the overall team.”

While the team makes robots that have a purpose, such as performing a specific task, they also create robots that are more for show. Two examples the team brought to show the St. Mary students were Thor’s hammer from the Marvel Cinematic Universe movies, and BB-8, a droid from the “Star Wars” sequel movies.

Following the demonstrations, students had the opportunity to ask N.Y.A.N. team members questions. The team also revealed that it takes time to perfect a robot. One of the robots N.Y.A.N. showed off to the students took 15 tries before it was perfected.

“It teaches you a lot about humility,” added Geoffroy, who plans to go into Industrial engineering and business in college. “I’m hoping the skills that I have from managing this team and the projects we’ve worked on will give me the experience I need and the insight to go out and succeed in the real world.”

For Brinkman, there was an extra special sense of pride in seeing so many young girls in the audience.

“It’s encouraging to see all the girls today along with the excitement on their faces,” she said with a big smile. “It made me hopeful for the future because I know as a woman in STEM there’s not very many of us. It’s a very male-dominated field so I hope that today we were able to instill the love of STEM and give these girls the confidence to know they can pursue this in high school and beyond.”