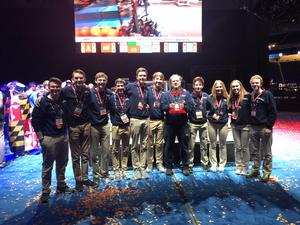 N.Y.A.N. Robotics competed in the FIRST® Tech Challenge (FTC) at the annual FIRST Championship in Detroit, Michigan. More than 17,000 students (ages 6-18) from 37 countries took part in the competition, putting their innovation skills to the test.

There were 7,000 FTC teams competing this season around the world, with 193 teams from Illinois alone. The world championship was made up of 160 teams from around the world who advanced there, separated into two 80-team divisions.

Over the span of three days, N.Y.A.N. won eight out of its nine matches. On the 4th day, after advancing to and then winning the semi-finals and finals of their division, N.Y.A.N. and their alliance partners competed in the championship bout at Ford Field in front of tens of thousands, where they played best-of-three against the alliance partners that won the finals of the other 80-team division…and ultimately won.

N.Y.A.N. competed at the highest level and was standing on the champion’s podium as a result of their great effort. Their world championship winning alliance included teams from Vincetown, N.J. and Hollis, N.H. They put Mundelein, Carmel Catholic and Illinois on the map for robotics, as an Illinois team has never won this event.