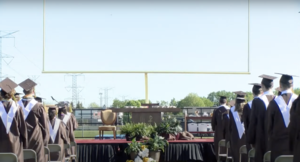 For the first time ever, Baccalaureate Mass and the Commencement Ceremony were held outside at Baker Stadium, with 253 graduates joining the ranks of Corsair alumni.
The commencement address was done by Fr. Christian Shiu, CCHS Chaplain.
The Valedictorians were Grace Hartzer and Lauren Kelley, and the Salutatorians were Kyle Heinz and Michaela Miller.
There were 51 alumni parents and alumni grandparents of the class of 2021.

Significant academic achievements/awards earned by members of the senior class during the 2020-21 school year:

Significant individual (by a senior) or team extracurricular achievements during the 2020-21 school year:

Significant individual (by a senior) or team athletic achievements during the 2020-21 school year:

Class president/officers: Executive/Senior Class Board
You can watch the entire Baccalaureate Mass and Graduation ceremony on YouTube.
Published June 2, 2021 Print